The battle between puppies and worms is an epic tale (or should that be tail?!). It has raged across the millennia, it is blood thirsty, causes huge amounts of suffering and is can be deadly.

It also goes to show that it doesn’t matter how adorable you are on the outside, it is what on the inside that really dictates your chances in life!

The struggle starts before the pup is even born, continues as soon as they suckle but really begins in earnest when they start to explore the world around them. 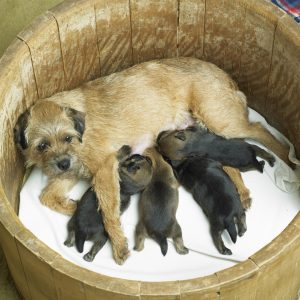 Cute! But they could already be infected with worms!

The problem is that, without our help, the puppies will lose! Worms are stronger and sneakier than our gorgeous new babies and can easily cause them a great deal of harm, or even kill them.

Also, puppy kisses, (although adorable and very welcome), can be seriously harmful if the owner of the enthusiastic tongue is carrying extra passengers. Children in-particular are very vulnerable to the same parasites and are probably being the least likely to discourage a furry family member from being over-effusive! 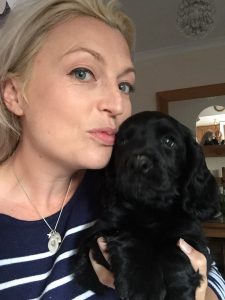 Puppy kisses, with from us or for us, are not always as cute as they seem, especially if they haven’t been wormed!

So, once more into the breach dear friends, let’s protect our puppies!

Round One – Worming Mum!

As all good generals know; If you fail to plan, you plan to fail, and this is certainly true in this fight.

All adult dogs will have been infected by worms at some point in their lives and while most will set up home in your pet and start to breed, a few will head to the muscles and mammary glands and lie low. Effectively acting as sleeper cells.

If the bitch never becomes pregnant, they will never activate but if she does, the hormonal changes wake them up and they set off into battle. One contingent heads to the intestines, maturing and producing eggs. These hide like concealed mines in the environment, waiting for the pups to snuffle them out and become infected.

Others head to the placenta and commando crawl into the puppies via the umbilical cord. Once they have gained entry, they infect the lungs and liver, setting up potentially fatal infestations before the pup has even taken their first breath.

The ones in the milk glands wait a little longer but as soon as milk is produced, they march into the fray and the unsuspecting newborns are contaminated from their very first meal.

When they are dormant in the muscles and mammary glands, it is impossible to kill the worms. They are only vulnerable once they are on the move. This is why regular worming is so vital in pregnant bitches; so we don’t miss this window of opportunity.

However, no matter how comprehensive our defensive strategies are, it is almost impossible to prevent this infection from behind the enemy lines. Which is why the next phase our protection strategy is so important

All puppies should be wormed every 2 weeks from the age of 2 weeks old to 8 weeks old. This is because, despite your best efforts at worming their mother, it is still possible for some parasites to get past your defences and achieve their aim of infecting the babies.

Repeated treatments are necessary because of the risk of continued infection from the milk and also because once they get older and start to explore, they can pick up dormant eggs from the environment.

And this can be both outside and inside your home! Eggs will be brought in by adult dogs, on their fur or from the microscopic time bombs being shed from bottoms (even very clean ones!). Worms are patient enemies and are happy to lie in wait anywhere

Puppies are the ideal victims because they are curious – sniffing everywhere and chewing on all sorts of things and they have an immature immune system, so can’t fight off the invaders near as well as an adult. 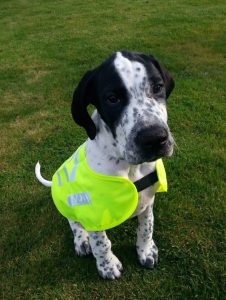 A high-vis vest will offer no protection against worms dude!

Round three – Knock out the allied troops!

Fleas and worms work together to infect your pets, so it is just as important to treat the proud mum and her little soldiers against external parasites as well as internal.

Fleas can cause all sorts of problems on their own; sore skin and anaemia are the most common, but they are also often carrying worms. So if they are eaten by your curious babies, the flea will die but the worm will live!

Many flea products, if applied to the bitch, will also protect the pups but they can be treated directly as well

Round four – Never give ground

Once puppies are eight weeks old, they will be leaving their breeder and heading off into the big, wide world.

This doesn’t mean we can stop protecting them though! In many ways, this is the most dangerous period. In a good breeder’s home and garden, where worming is regularly done, the numbers of hidden eggs will be small but once a puppy’s vaccinations are finished and they are free to roam, they will be exposed to hordes of potential attackers.

All pups should be wormed monthly until 6 months old. Again, this is because their curious natures means they are more likely to get infected and their inexperienced immune systems mean the worms can quickly overwhelm them.

If you are a proud new puppy owner, you are now in charge of protecting them! Make sure you speak to the breeder about what their battle plan was and to your vet about how best to move forward to a worm free victory!

This is a sponsored blog for Elanco Animal Health and their ‘WormWise’ campaign but all the opinions in it are my own!

If you enjoyed this blog, check out ‘My Pet Doesn’t Have Worms!’ and ‘How To Avoid A Tapeworm Takeover!’