My Pet Doesn’t Have Worms!!

I know you probably think that your pet doesn’t have worms.  They look ok (pretty fat in fact if you’re honest), their poo is normal, and they aren’t eating like something else is digesting their dinner (ok, so they ARE but that is nothing new!), so this must mean they don’t have worms, right?

It’s true.  Your darling doggy or favourite feline, the one who licks your face and shares your bed, could easily has a whole civilisation of wormy wrigglers happily camping inside them! 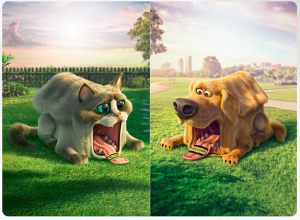 Click on the picture and take the Elanco ‘Worm Wise’ Risk Checker to see how likely it is that your pet will pick up worms!

So how can you tell if they have worms?

To be honest, unless your vet runs tests, it can be difficult.  However, if you aren’t worming them on a regular basis, it is a pretty safe bet they have some internal passengers.

But there are no worms in their poo!

First of all, if the worms are happily alive on the inside, they aren’t going to voluntarily take a trip to see the big wide world.  Most species attach themselves firmly to the lining of the intestines and stay there.

However, they do produce eggs, millions in fact, but these are microscopic.  So you won’t spot them, no matter how carefully you inspect your pet’s bottom nuggets of goodness.

It is actually pretty unusual to see actual adult worms in the faeces, and if you do it must mean there are a HUGE amount in there.  Most of the time you won’t even see them if you do worm your pet, because once they die, they get digested and destroyed by the body.

And even if they produce poop that is easy to scoop, again it doesn’t mean they don’t have worms.  It just means their body is managing to digest things properly, despite the hangers-on it in’s way. 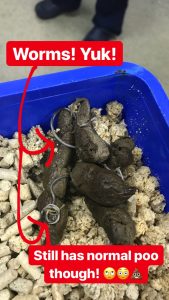 This is what most people expect to see if their pet has worms but it is REALLY unusual and generally means there are LOADS of worms! Also, note the poo itself is very normal!

It is true that some dogs really enjoy truffle hunting for little treasures left behind by other animals and they certainly are at a huge risk of infecting themselves with worms, but remember those millions of microscopic eggs?

They are brilliant at surviving in the soil, just waiting to get snuffled up by a curious nose or onto furry feet, or tummies, or bottoms.  All of which will soon be enthusiastically licked clean.  Once they are inside your pet’s stomach, they hatch and, like the salmon returning to their ancestral river, start the cycle again!

Cats that hunt are more likely to be infected with worms, think of it as their prey’s revenge from beyond the grave, but that doesn’t mean that the ones who leave the local wildlife alone are not going to be infected.

Again, it comes down to all those eggs in the soil (or the ones that just hang on in the bottom fur, ready to be groomed right back inside again) and also fleas.  Fleas and worms work as a team and if your pet has one, they are pretty likely to have both!

Nope, still no guarantee of not picking up worms!

We can easily bring those pesky eggs into the house on our shoes!  And fleas can cross the threshold too, on us, or visitors, or just by hopping in from the garden.

Young animals with worms often will look pretty ropey.  They can have pot bellies, be skinny and have dry coats.  This is because if they do have worms, they tend to have loads.  A combination of it being really easy for them to get infected from their mother and also because their immune systems aren’t as good as adults.  Thus the worms run riot.

Adult animals though are MUCH better at coping with a worm burden, so they can easily a have glossy coats, a slim figure and plenty of energy while still being a very efficient tapeworm transporter.

So, if your pet ever goes outside or ever licks themselves and even if they have solid poo and are the picture of health,  it is a pretty safe bet they will get infected with worms.

Which is why regular worming, is so important!

Be Worm Wise and take the worm risk checker to see how likely it is that your pet has worms!

**This blog is part of a paid partnership with Elanco Animal Health but all the views in it are my own!**