It can be difficult to tell if your animal has worms as they live inside your pet. They shed eggs in your pet’s faeces but these are microscopic and cannot be seen with the naked eye. Cats who are hunters and dogs which scavenge are more at risk from becoming infected with worms. Their control is particularly important in houses with children as they can become easily infected with animal worms.

Basically worms are wormed-shaped parasites that live inside your pet. They are mainly found in the intestines but can also be found in the hearts and lung.

There are several types of worms but these can be split into 4 main categories:

Worms can range in size from a few millimeters long to several meters! 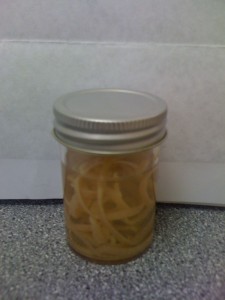 These are tapeworms.  You will only see them like this if you pet is very infected and passes them in their faeces or vomit.  This is quite unusual and generally only seen in puppies.

How can my pet catch worms?

How can I tell if my pet has worms?

Hunting will increase your pets chances of getting worms
Fleas and worms go together, always treat regularly for both
An itchy bottom can be a sign of worms

How do I treat for worms?

There are many different forms of wormer; tablets, granules, liquid, and spot-ons are all available from your vet.

Children are particularly at risk from catching worms from pets as they often have a very close relationship
Always remember to clean up after your dog, contaminated faeces is one of the most common ways worms spread.

Heartworm is transmitted by flying insects, but it is easily prevented with veterinary standard wormers. Also, help prevent infection by keeping your animals inside at dawn and dusk when they are abroad.

Puppies can catch worms from their mother when suckling, and also because of their naturally curious nature, so it is really important to worm them correctly

Please note, this is an advice only website. If you have any specific queries or concerns about your pet, you should contact your vet.