I often have conversations with clients where they admit to me they would like a litter of pups from their dog and, to be honest, I usually do my best to dissuade them.  I use all the classic arguments; ‘there’s plenty of unwanted dogs in the world already, why add to the problem’ and ‘it’s a lot harder work than you think’ and, of course the old chestnut, ‘NO! It is not ‘better’ for your bitch to have a litter’!  However, after a recent conversation with a colleague, I started to to wonder if I have the wrong approach.

Sure, there are loads of dogs in kennels desperate for homes but the fact of the matter is many people don’t want an adult dog, they want a puppy and, often, once this has been decided they want one ‘now’ and there in lies one of the reasons for the success of puppy farms.  They churn out dogs at such a rate they always have available what is needed. In contrast to the responsible professional breeders who might produce only a couple of litters a year and who often have waiting lists.

The message how to avoid buying a puppy farm puppy has been broadcast loud and clear for a long time now and I think most people know what they should do; always see a pup with the bitch, only buy from a registered breeder (if you want a pedigree), never trust anyone who agrees to bring the dog to you (or worse, meet you half way at a service station), etc, etc but the fact of the matter is, when faced with a cute bundle of fluff, common sense often flies out of the window.  Worse still are the ones who buy the pup to ‘rescue’ it, a laudable notion but one which inevitably will only encourage the unscrupulous traders.

Of course, the other source of pups are those clients of mine, and many vets, who opt to just have one litter but is the well meaning approach of us animal professionals causing the supply of amateur, home bred pups to dry up?  Leaving those who ‘just want a puppy’ with no option but to go to the farms and back yard breeders?  When the nice family with the nice labrador bitch are standing in front of me and saying they are thinking about having ‘just one’ litter, should I be more encouraging?  At least they (probably) aren’t in it for the money, are going to care for the pups, bring them up in the family home and, given they are already in the practice, will hopefully be prepared to listen to veterinary advice on the best way to go about it. 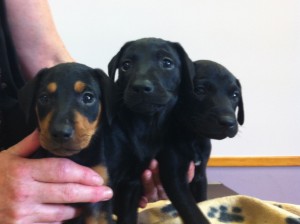 These pups were an accident between a labrador and a Rottie.  So not the full pedigrees that many people are after but well brought up & cared for dogs that should make excellent family pets and at least both the parents are known!

I’m not sure what I will do in the future, probably judge each case and client on their merits, and adjust my advice accordingly.  I certainly do not think the ‘doggy world’ as a whole should change the message of ‘don’t breed, rescue’ but maybe we should think about not taking such a hard line (in some cases) against hobby breeders.  The puppy farms, despite all efforts, seem to be going from strength to strength, and this might be another way their poisonous influence could be curtailed; by encouraging the right people to breed at the same time as working hard to stop the wrong ones!