‘Designer’ Dogs – A Fashion Too Far?

A couple of weeks ago I saw a six year old Shih Tzu cross Jack Russell Terrier. He was a lovely healthy chap and as a puppy had cost his owners £50 from a local rescue. During the consult we discussed how now his litter would be marketed as ‘pure-bred’ Jack-S**ts’ & sold for at least £300! The phenomenon of designer dogs has been around for a few years and I am used to seeing proud owners of Cockerpoos and Yorkiedoodles in my consulting room. They are often described to me as ‘pedigree’ or ‘pure bred’, which, of course, they aren’t (by definition really!) but I rarely discuss this with my clients. They are pleased as punch with their new baby and why not? The puppy before me, like the vast majority, is a happy and healthy creature with a family that loves it and, hopefully, a long future ahead.

The emergence of ‘Designer Dogs’ really started after the ‘Pedigree Dogs Exposed’ TV program. This, quite rightly, revealed the huge problems within the pedigree dog world of in-breeding and extreme conformations but left many people with the impression that ‘pedigree’ was synonomous with ‘bad’ and encouraged them to look at other options for their family pet. Labradoodles were already well established; some bright spark thought of combining other breeds and the ball started to roll. 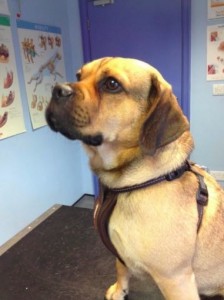 This guy is a ‘Puggle’, a Beagle and Pug cross.
I am SURE this combination was only created because they would have a cute name.

It is a common misconception that these mixed breed dogs are healthier than pedigrees. Certainly many will have a degree of hybrid vigour but often issues can be magnified. For example, crossing two big eyed breeds, like Pugs and Cavilers (Pugaliers – sigh), can produce pups with such bulging eyes they have real problems. Also, the best pedigrees will have had pre-breeding health checks performed and although they don’t guarantee any offspring will be problem free, they are very helpful. No such official testing is done in the vast majority of designer dogs.

The completely unregulated nature of designer dogs, the fact that the breed combinations are endless and that the prices charged for the puppies are high, has meant there has been an explosion in the numbers bred and this is really where my issue with them lies.

There are far too many unwanted dogs in the world already and this fashion has added vastly to the number. Backyard breeders and the dreaded puppy farms have jumped on the band wagon and churn out poor quality, badly bred and barely socialised puppies with funky names by the thousand.

Of course, it would be nice if everyone who wanted a puppy decided to get one from rescue but this will never happen.

And the money charged for these dogs is astonishing. Only yesterday a client of mine told me about a litter of Cockerpoos going for £800-£1000 each! This is far more than  you would pay for either of the parent breeds, who may well have had breeding testing and ‘proper’ pedigrees.

We can try until we are blue in the face to point out that these dogs are just cross-breeds and should be half the price of the pedigrees not twice but ‘Designer Dogs’ are here to stay. The important thing now is to encourage responsible breeding and, more importantly, to continue to spread the message to potential puppy parents of how to recognise a well bred & well socialised litter.

Ultimately it doesn’t matter if a pup is a fully registered Kennel Club dog with a pedigree longer than the Queen’s or a make-believe breed.  What matters is that their owners have done their research, chosen a dog suitable for their family and lifestyle and are prepared to make a commitment lasting the whole of the life of their new pet.

If you liked this blog, you might like ‘So You Think You Are A Good Pet Owner?’

This article original appeared on the The Huffington Post

Foreign Rescue Dogs – What Should We Be Testing For?