Woo hoo!  You have decided to get a dog, how exciting!  The kids nagging has finally paid off/you’ve moved in with your partner (See 10 Reasons Why Being a Pet Owner is Great Practice for Being a Parent)/you’ve been made redundant and finally have the time!  So, better get on with it!

Firstly, what sort of dog should you have?  A Staffie like all your mates?  A Collie (you’ve always fancied yourself as a bit of a country gent!)?  A Dalmatian, like the kids have been asking for ever since they saw the movie?  A Husky, those blue eyes are just totes gorge!.  Or maybe something small that will fit in your handbag like on ‘Housewives of where ever’

The important thing though is what they look like.  Either as a tiny puppy (OMG, have you seen the adverts on Gumtree, they are soon cute, you want them ALL!) or as an adult dog.  I mean, no one wants to see a bloke walking a tiny, little dog, you need a MAN’s dog, like an Akita. 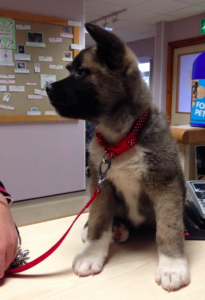 This is an Akita. Very cute and fluffy as puppies but they grow into 50kg of pure muscle. Still, not to worry, look how gorgeous she is!!

You could go and find a bit more out about the breeds, there is always lots of information on Google, or maybe go along to a local show, or just chat to the bloke in the park who walks that really hunky English Bulldog but why bother?  It’s just a dog.  They are all the same and anyway, you had dogs when you were a kid and all your mates have got them, how hard can it be?

What is FAR more important is finding one for sale!  Now you have made the decision, there’s no point waiting around!  Better start with Gumtree or Preloved or even FaceBook.  A friend-of-a-friend posted last week about a litter their bitch had, although they weren’t too sure about the father, LOL!

Someone said something about the Kennel Club website and registered breeders but boooring!  Anyway, you’ve checked and there aren’t any litters available and they’ve probably be dead expensive.  It’s not like you’re made of money and besides, everyone loves a bargain don’t they?!

So, time to make some phone calls!  All mobile numbers but who has a landline these days?  You spoke to a guy who seemed really nice and even offered to deliver it to your door.  Ha!  No way, you know that game.  You want the pick of the litter, not the runt!  You are going to see the babies, cast your eye over them and chose the best one.  You know what you are looking for and anyway, who would pass up the chance to cuddle a whole litter of pups?!

Hurrah!  You think you’ve found what you are after!  A gorgeous litter of pedigree Jacka-wa-wa’s have just appeared on Preloved, they are totes adorbes!  The house is only half an hour away and they are 6 weeks old and ready to go!

It was a bit weird that the pups didn’t actually look much like the ones in the photos on-line but they were so beautiful, all wobbly and cute!  The bitch wasn’t there, apparently she wasn’t the best mum (poor little babies!) and as she belongs to the man’s mother’s brother’s friend, she’s stayed with them and he’s selling them as a favour.

If you’re honest, the house wasn’t that nice.  It did smell a bit and the pups were in a shed out the back which was quite dirty and the bloke selling them didn’t seem to know much and they were all a bit scruffy and hungry.  You couldn’t possibly have left your new baby there, really you felt like you rescued him (go you!).  Although he did cost £400.  Cash only, obvs! 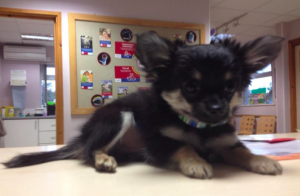 When faced with a cute bundle of fluff, all common sense goes out of the window. Would you buy a full priced washing machine from a dodgy guy with no guarantees? They why would you buy a dog like this?!?

Anyway, now he is home and settling really well, the kids love him!  It was a shame he had diarrhoea, worms, fleas and the vet said he is underweight.  They also mentioned a heart murmur and that his jaw was undershot but hopefully he will grow out of those.  Afterall, with all the money he cost, there’s none left for vets bills!

How Much Is That Puppy On The Internet?

It’s not the breed – it’s where they’re bred!