Home   /   All in a days work! An unexpected splenectomy!

All in a days work! An unexpected splenectomy!

When people ask me what I love about my job I will often say it is because every day is different and you don’t know what you might be faced with. You can think you have a pretty good idea from looking at the appointments but then the phone will ring and everything changes! (Especially if you have said the ‘q’ word, one must never utter the word quiet, or you can be sure all hell will break loose!)

We had a lovely old lady dog booked in for some xrays yesterday morning. She hadn’t been well all week and had a wobbly episode that put her in the hospital over-night last weekend. Tests then hadn’t shown anything conclusive and we were worried she might have painful arthritis that was preventing her from standing properly.

However, when the pictures developed, it turned out it was something else entirely! (Although she was indeed terribly arthritic) She had at least two tumours in her abdomen and her symptoms had probably been caused by these bleeding internally. I spoke at length to her owners about how they wanted to proceed and end they decided they wanted to do everything they could and asked me to operate, to see if I could remove the cancer. It wasn’t an easy decision, she is already quite a poorly dog, as well as being elderly, and the surgery is a risky one at the best of times. There was also a chance I would open her up and find the mass had spread to several organs, in which case the outlook would be hopeless and the fairest thing would be to put her to sleep while under the anaesthetic. However, this lovely couple had brought her from their homeland when they emigrated to the UK; she had provided them with valuable support during the stressful months of settling in and they now wanted to show her the same love and dedication. 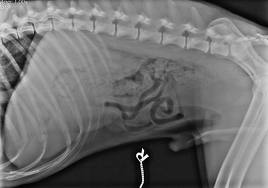 An xray of a normal dog’s abdomen. 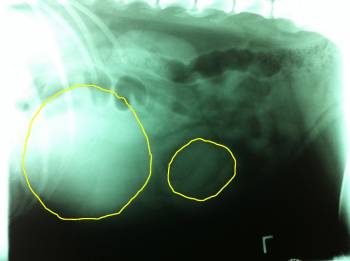 The photo I took, highlighted are two round shadows which are the tumours.

I was nervous starting the surgery because I so wanted it to turn out well but you never know when you make that first cut. It soon became clear there was a very large mass in her spleen that was thoroughly tangled up with the other internal tissues. There was also a large tear in the centre of the tumour, where it had bled the few days previously and was threatening to do so again. So, I took a deep breath and very gently teased the mass out, cut off the blood vessels which were feeding it one by one and, with the help of my fabulous nurse, lifted it away from the body. Then I was able to check the rest of the organs and the very good news was that none showed any sign of also being cancerous! Hurrah! 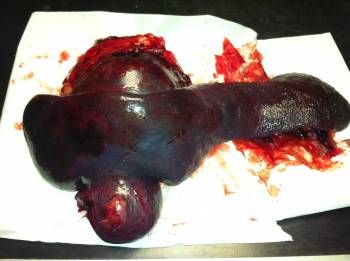 The spleen with the tumour is on the right. You can easily make out it’s normal strap-like appearance with the growth distorting this on the left end. 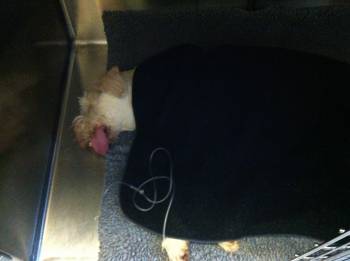 My girl in recovery post-op, tucked up warm and doing well!

This fabulous girl was very dopey when she came round but was able to sit up for a fuss and a cuddle. She spent the night being cared for by the emergency vets and went home this morning. Her owner is really pleased and thinks she is already happier than she has been for some time and I am delighted that everything turned out so well. We still have to wait for the lab results to find out exactly what the tumour was and she has a way to go in the healing process but so far, so good! 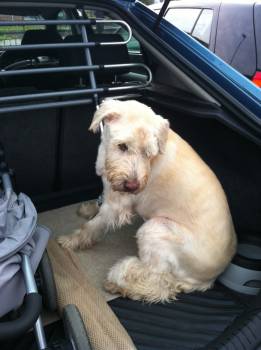 In the car, on the way home, looking and feeling much better!

After the op I sat down to write up my notes before starting a busy evening surgery. I had been planning on a quiet afternoon and maybe popping out to run some errands but what I ended up doing was much more satisfying than standing in the Post Office queue! I do love my job!

UPDATE!!  The results came back from the lab and this growth was benign!  This is great news and doesn’t happen very often.  It is now a couple of weeks after the surgery and this lovely lady is doing well and enjoying life again!

When Love Leaves it Too Late

How can a dog’s microbiome be damaged and how can we restore it?