I am mad.  So steamingly, furiously angry I could cry and with bl**dy good reason.

Over the just past few weeks I have seen;

A Shar pei puppy of only 4 months who had already lost an eye.  Her excessive facial skin folds had rubbed on her delicate cornea, causing so much damage it was beyond repair. 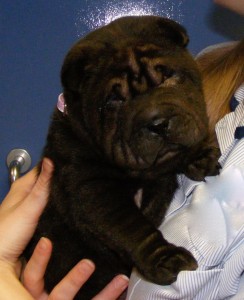 Look into her eyes. Oh, you can’t because her eyelids are rolling all over them

A French Bulldog with a face so shrunken in and a nose so tiny he was pretty much unable to breath.

An English Bulldog with a tail screwed so tightly there was a permanent and very painful infection in the skin folds.  We would like to amputate but the screw runs into her spine and we would run the very real risk of paralysing her.

And a Peke puppy with a face so flat you could have put a ruler up against it.

How can people do this?  How can they breed dogs with features so extreme they suffer from the moment they are born until the minute they die?  Dogs who can’t breath, who can’t blink and who can barely walk.

Simply, they just don’t care.  They just churn out these little cash cows, take the money and run.

The gullible fools who buy them are hardly blameless either.  All they really want is their cute, fashionable little status symbol on the end of the lead and care little about where they came from or how (un)healthy they may be.

In the history of anywhere ever, has anyone gone to view a litter of pugs and said ‘Oh, their faces are rather flat and their eyes are approximately three sizes too large for their heads.  You know what, I’ll leave it thanks.’ 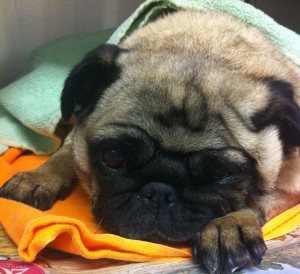 The flatter the face, the bigger the problems

No.  They do not.  Even if they think the breeder might be dodgy or the pups sickly, they are more likely to buy one anyway and then tell me proudly they ‘rescued’ it rather than walking away.  Whereupon the vendor quickly mates their exhausted bitch again or worse, imports more from abroad.

And you know what the worst thing is?  The horrible, frustrating, maddening fact is there is absolutely nothing I can do about it.

Sure, I can write these blogs and they might get shared a bit but probably by people who already agree with me.

The criminals producing these dogs know exactly what is happening but couldn’t give a toss.

The new owners are as wide eyed and foolish as the puppies they buy and depressingly few seem to be educated on what problems they might face or how to pick a ‘better’ conformation from a dreadful one.

The Kennel Club are no help at all.  The vast majority of these dogs are produced from well outside their influence and any (tiny) changes they might make to breed standards will have no effect at all.

I don’t know how to change this, I honestly don’t.  There is loads of information out there about how to pick a good breeder and dog but nobody seems to read it.  The mainstream media aren’t interested and quite frankly it would have to be the lead story on ‘This Morning’, ‘The One Show’ and ‘Paul O’Grady’ every day for ever and ever, to even make a dent in the public’s ignorance.

So, my colleagues and I will just keep seeing these dogs.  Treating their ulcerated eyes, their narrowed, infected ear canals, their red raw skin folds and performing life saving but life threatening surgeries just so they can see and breathe relatively normally.

But to the people who breed these dogs so badly, I hate you, I really, really do.

Why The Flat Face?

It shouldn’t be easy to buy a dog