I spent last weekend camping in a field at a festive and to my extreme surprise (I am VERY much a home comforts kind of a girl), I really enjoyed it!

Granted, I was in a glamping tent, with an airbed and several duvets, that was ready for me when I arrived.  Yes, there were toilets and hot showers within 30 seconds walk.  Indeed, there were hairdryers, dressing tables and mirrors in a designated ‘Pamper Tent’ and power points for my phone but still, by my personal standards, I was roughing it!

THIS is my idea of camping!

Of course, this was no ordinary festival but Vet Festival.  The brainchild and baby of Mr Noel FP himself.  Obviously I had heard about it, but being of a sensitive (read, uptight) nature and from the frozen wastelands of the north,(not quite behind a wall but Cross Country rail occasionally makes feels like it)  I wasn’t really tempted by CPD in the great outdoors on the southern plains.

However, it turned out I was wrong!

If you chose to glamp, the tents are all set out for you and even come with a vanity box of essentials (which was handy because I did actually forget my toothbrush!).  There are other pre–prepared options available, with large tents for several people and even small one man affairs.  You can also bring your own camping accommodation, if you are that way inclined.  The campsite toilets (because I know you want to know!) were only portaloos but they had nice posh proper flushing ones on the festival site.  So if you are sensitive of nature but strong of bladder, you could always just pop over there!

The festival itself is compact (no trekking across miles of muddy fields here!) and dominated by the Main Stage, from which Noel gave the crowds a couple of his famous rousing speeches and where an excellent band and DJ played on Friday night. 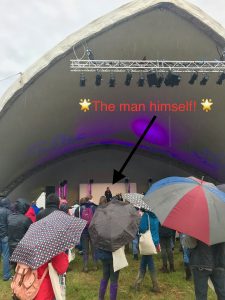 The man himself, motivating the crowds for a day of CPD in the rain! (It was really fine actually!)

There is a large central communal teepee style tent with plenty of benches, outdoor sofas and even straw bales for seating.  Here tea and coffee were available all day and even pastries in the morning. Which was welcomed very much by this camper, who doesn’t know one end of a billy can from the other.

The lectures were all held in marquee type tents and there was no issue at all with the sound or powerpoints.  The subjects covered were varied and every single speaker I saw made a real effort to be relevant to first opinion practice.  The streams all ran at the same time, so it was easy to dip and out (I’m looking at you London Vet Show!).  My festival buddy was an RVN and she really enjoyed the nursing streams but also found many other talks were relevant to her as well. 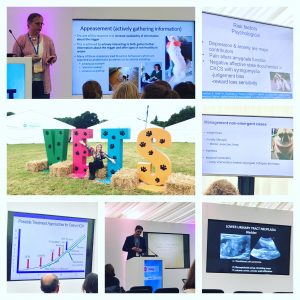 The lectures were genuinely varied, relevant and educational.

In addition to the main streams, the PDSA had their Battle Bus (they call it their ‘Mobile Community Outreach Unit’ but honestly I think they’ve missed a trick) where they held small group sessions and the ‘Innovation Hub’ was a new feature this year, where companies discussed their latest, umm, innovations!

There was even a dedicated ‘Wellness Tent’ where yoga and meditation sessions were running. 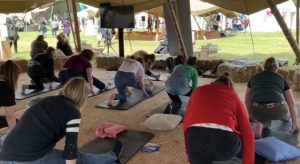 Yoga in the great outdoors! (But under cover, which is sensible!)

However, all conferences these days have brilliant education, so let’s talk about the things that really matter; the food, the drinks and the freebies!

The food really was good. A salad bowl with a choice of filling and a chocolate brownie you could build a house with was lunch each day.  The only slight black mark on the catering front was that the food available on Friday night was limited (hipster macaroni or pizza) and expensive.  If you come by car then it is pretty easy to pop back into Guildford but if you hadn’t, and you hadn’t brought anything with you, you were a bit stuck. 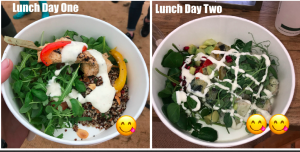 The lunches were GOOD!

It was the same for the drinks at the party, prices were basically bar charges, but you were welcome to bring your own and isn’t drinking warm white wine from a tumbler what festivals are all about?!  During the day, plenty of the stands had bribes drinks available, which meant the afternoons passed very pleasantly indeed.

I wonder if it isn’t too expensive to have a stand at VetFest because there were quite a few small companies, charities and organisations who I haven’t seen before, which was nice.  The free stuff was flowing and we brought home the usual impressive haul of pens, toys and free samples. 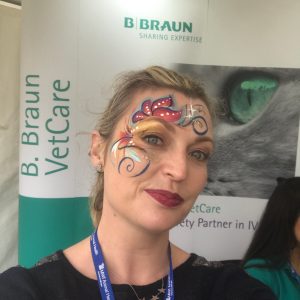 The best freebie by far was the face painting! This makes me cool, right?!

So, would I go again?  Actually, I would!  Even though it rained for most of Friday this year, and wellies and umbrellas were absolutely required, it didn’t dampen our sprits, just our pac-a-macs!

The journey down from the north by train wasn’t particularly onerous (although I did deliberately book a route that didn’t force me through London).  Glamping was great and there is something about stepping straight out into the fresh air after a lecture that meant I stayed alert and keen all day!

Just make sure you bring plenty of snacks and (alcoholic!) drinks of your own, wellies even if the forecast promises to be pleasant (just in case!) and don’t forget bed socks!

If you book your tickets for Vet Festival 2020 before June 30th, you will get a 25% discount on tickets.  So, maybe see you there?!

** This is a sponsored blog but all the opinions in it are genuine and my own!**

*You can see my Vet Festival experience in my saved Instastories!*