Hyperthyroidism ( an over-active Thyroid gland) is one of the most common diseases seen in older cats. It is easily diagnosed by blood tests and can be treated with either tablets, surgery or radiotherapy. Treated cats can go on to live normal lives. It is very rare in dogs.

What are the symptoms of Hyperthyroidism?

Symptoms of hyperthyroidism include;

Hyperthyroidism is an important disease to diagnose and treat, as the increased metabolic rate will have many detrimental effects on the body including; 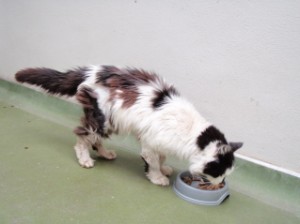 This cat is a typical example of Hyperthyroidism. It is very thin, has an unkempt coat, and a ravenous appetite.

How is Hyperthyroidism diagnosed?

How is Hyperthyroidism treated?

Regular tablets, either once or twice daily, are the most common way to treat Hyperthyroidism. 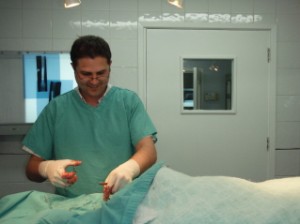 Surgery is a curative option for Hyperthyroidism. Sometimes two operations are necessary so each gland is removed seperately, to reduce the chances of side effects.

Hyperthyroidism in cats is a very common disease, but it is easily diagnosed with blood tests and easily treated with either regular medication, surgery or radiotherapy. Once the disease has been cured, or is under control, cats can go on to lead normal lives.

Please note, this is an advice only website. If you have any specific queries about your pet, you should contact your vet