Diabetes mellitus is the most common form of diabetes and occurs in both dogs and cats. It is caused by a lack of the hormone insulin and causes very high levels of blood sugar. It is easily diagnosed by testing the levels of sugar in the blood and is treated by regular injections and a regulated diet and exercise plan (for the dogs!). Well controlled diabetics can go on to lead full and active lives.

What is Diabetes Mellitus? 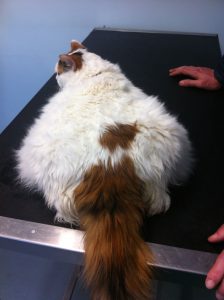 Obesity is a huge risk factor for the development of diabetes, particularly in cats 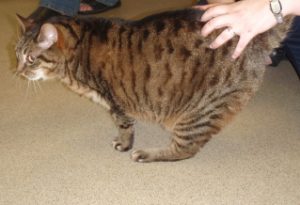 This cat is showing a classic plantigrade stance. It has ‘sunk down’ on its back legs and is unable to straighten them. It can still walk. 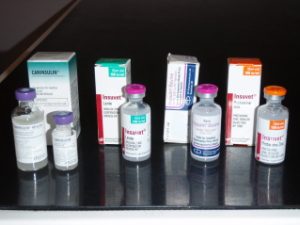 There are several different types of insulin available, your vet will chose the one most suitable for you and your pet.

To watch me demonstrating how to inject a cat with insulin, watch this video;

This is a very important aspect of a diabetics treatment, When animals eat, their blood sugar levels will rise, so controlling what and when they eat is very vital to gain good control of their blood sugar.

It is very important to regularly monitor the blood sugar levels of a diabetic animal, especially in the first few week after the diagnosis, when your vet will be calculating the correct dose of insulin that needs to be given.

Difficulty in stabilising the diabetes

Being the owner of a diabetic animal is demanding, but also hugely rewarding when you see your pet respond to the treatment and become their old selves again. There is no doubt it is a huge commitment on your part, but your vet should always be available to help and answer any queries.

Please note, this is an advice only website, if you have any specific concerns or queries about your pet, you should contact your veterinary surgeon.

How To Train Your Vets

What Do Veterinary Nurses Do?