Up until the year 2000 our country had a long held quarantine law that stated that any dog, cat or ferret travelling from abroad had to spend six months in secure kennels before being able to enter the UK.  In 2000 this was abandoned and replaced with the Pet Travel Scheme, otherwise known as PETS.

Initially this allowed animals to come into the UK without quarantine provided they had been vaccinated against Rabies, had a blood test to ensure their protection was adequate, had waited 6 months for it to establish in their system, been issued with a passport AND were treated by a veterinary surgeon against ticks and worms before they entered the country.

This brought us more in-line with the rest of the EU while still protecting the health of the UK’s human population. (And it is important to note that these regulations are not in place to protect our pets, just people.)

Since then, and very much against veterinary advice, PETS been thoroughly watered down.  First the blood test was scrapped, then the waiting time after the vaccine was slashed from 6 months to just 3 weeks.  Finally, and most concerningly (some might say stupidly), the requirement for tick treatment was dropped.

All of which has left our island state, previously enviably free of diseases and parasites common on the continent, extremely vulnerable.

For example, in the last few months a huge fuss has been made about the diagnosis of the tick borne disease ‘Babesiosis’ in dogs who, crucially, had never travelled and researchers found the offending species of tick, never before seen in the UK but a native on the continent, alive and thriving in the local area.

Also, it has recently been realised that a truly horrible nasal worm is hitchhiking into our country in adult dogs, often the ones brought in by well-meaning rescues from the streets of Eastern Europe.  It is extremely resistant to treatment and could easily spread to the local population.

There are also plenty of other hideous parasitic diseases that can infect your pet against which there is no requirement to protect them.  Heartworm and Leishmania to name just two.  Again, remember the PETS is to protect people, not the actual travelling animal.

Many holiday makers are extremely diligent and carefully follow veterinary advice on what products to use but many do not, putting all pets at risk, not just their own.   Vets are now regularly diagnosing and managing illnesses that have never been seen before in the UK and, in some cases the vital drugs needed for treatment aren’t available in this country.

Once these diseases are with us, there is nothing we can do to be rid of them, and with the numbers of touring and imported animals only increasing, our problems are going to get worse.

As well as pets going on family holidays.  The change in the regulations has opened the flood gates to foreign dogs able to enter the UK.

Imports from puppy farms have soared since the six month waiting period was dropped and they could be brought in while still at the ‘cute’, and easily sellable, stage.  Although they should be 14 weeks old, microchiped and fully rabies vaccinated, the huge numbers coming in have completely over-whelmed our border controls and it is likely that very many are completely non-compliant with the regulations. 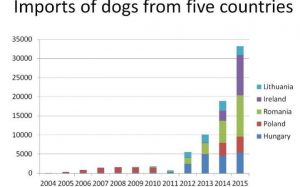 This graph shows clearly the exponential explosion in imports of dogs from abroad, the majority from puppy farms.

Not only is this a massive welfare issue, the conditions in puppy farms in deepest darkest Europe are notoriously horrific, but it also represents a serious infection risk for all kinds of illnesses, Rabies in particular.  It is a commonly held opinion within the veterinary community that it is only a matter of time before one of these adorable bundles of fluff infects the UK with one of the deadliest diseases known to man.

There has also been a sharp rise in the number of stray dogs being saved from the streets of the continent and re-homed in the UK.  While it is true some of these dogs have suffered appalling living conditions and many charities work very hard to ensure they are healthy before they travel, they too represent a big risk in the diseases they can carry and can be a real diagnostic and treatment headache to vets if they do get sick, and potentially very expensive for their new owners.

(And before I get lynched – yes, I am well aware of the conditions these dogs can live in and the good work these charities do – I just feel that sometimes the reality of the risks and complications are not taken seriously enough alongside the enthusiasm of the rescue work)

So, has it all been worth it?

Sure, you can now take your dog camping in the South of France or travel to international shows if that is your thing.  Some street dogs do lead horrible lives and now a lucky few can be saved.

But the price we have paid, especially since the extremely foolish relaxation of the regulations, is that previously unheard of diseases are here and infecting our pets, our rabies risk is sky high and cruel, concentration camp puppy farms are flourishing.

A return to the old days of quarantine is probably, unfortunately, unrealistic but I really feel the government should consider taking the PETS back to it’s original form because at the moment it most certainly is the PITS!

What Do Veterinary Nurses Do?

Do You Know About Canine Brucellosis?

So you think you are a good pet owner?