Every time I see a new puppy, I ask two questions; Did you go far to get them? and; Did you see the mother and the rest of the litter? The answers I receive will quickly identify those from puppy farms or unscrupulous breeders and then I can discuss, with the besotted but misguided owner, the potential problems their bundle of fluff may bring.

Thankfully the majority of pups have been responsibly bred but a significant proportion are not and they come though my doors with depressing regularity.

My heart sinks when my client says ´Oh no, I didn´t have to travel at all, a nice man dropped him off a the motorway services/Asda car park/local lay-by´ as this generally means it is the product of a puppy farm. Usually they have answered an advert in the local Bargain Pages, with only a (disposable) mobile number as a contact, been asked what breed of puppy they wanted (which should always ring alarm bells!) and told the cost and the delivery arrangements. The puppy will be delivered in the back of a van, probably with others of its kind but not with any food or water, and the prospective owner told to take their pick.

Sometimes people have visited a private home but are only presented with a single pup to view, or a litter but no bitch, or a bitch who may or may not have been the mother.   There are often fulsome promises of pedigree papers in the post, which will never arrive, and that health testing has been done, but no proof will be given.

One thing that can be guaranteed is that you will never, ever see where these poor babies have really been born or the squalid conditions they were kept in.

Puppy farms are terrible places, where ´pedigree´ bitches are bred from again and again, often in filthy surroundings and with very little human contact. The puppies they produce are generally poor specimens, sickly and suffering from disease. The lack of human contact and the fact they are often removed from their mother and the litter far too early, can mean they suffer from behavioual issues as adult dogs. However, even if a pup is not bred at a puppy farm, it does not mean it has been correctly produced. There are plenty of unscrupulous breeders out there of all kinds, out to make money only, and it is definitely a ´buyers beware´ market.

It always amazes me just how little thought goes into the purchase of a puppy, I honestly believe the majority of people put more effort into researching new kitchen appliances than a pet who is likely to give for a decade or more and be an integral part of the family.

Think about it, if you are buying a new appliance you will probably shop around, check out the features of the various machines, read reviews on reliability and ease of use and you may even compare the different stores warranty and return policies before carefully making your choice. Whereas a dog is often purchased simply on looks alone or what is the latest trend at the time. Often very little thought goes into their needs, how much exercise or attention it will require and what sort of training and environment would be best, which can often spell disaster. 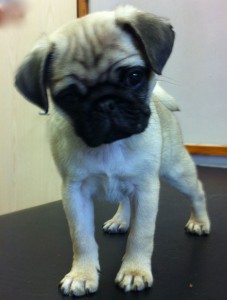 When presented with a cute puppy, often common sense goes out of the window. However, impulse purchases or buying from non-registered breeders only encourages poor breeding and animal cruelty

It is this flippant attitude that has allowed puppy farms and other unscrupulous breeders to flourish (and is probably behind the statistic that the biggest killer of young dogs is euthanasia for behavioural reasons – but that is another article in itself).

Among the dogs I have seen recently from puppy farms are ´Marley´ (a yellow Labrador of course) who was extremely poorly with diarrhoea and ´Tiny´ a Yorkshire Terrier who had three, yes three, different hernias (one umbilical and two inguinal), which area related to poor breeding. Both of these dogs had been purchased on a whim and their owners, and the pups themselves, would suffer the consequences.

Marley was bought because his owner had seen the film. She hadn´t been able to afford the prices of ´proper´ pedigree labs and, unsurprisingly, was now struggling to afford he treatment he needed. Tiny was a gift and again, the price and the convenience of the availability of the dog had been key factors in her purchase. She will require an operation to repair the hernias, subjecting her to the risks of surgery and her owners to its expense.

When you see this thing time and again you cannot help but wonder, who is really to blame? Is it the puppy farms producing these pups or is it the purchasers, creating a demand for cheap, easily available ´pedigree´ animals?  It is a difficult question to face, but we as ‘pet lovers’ have to take some of the responsibility for flourishing of puppy farms and other unscrupulous breeder.

Taking on a dog is a big responsibility and not a decision to be undertaken lightly. You must do your research, both on the kind of dog best for you and on the home it has come from. If everyone did this, the puppy farms would soon be wiped out. But above all, never, ever accept a pup which is delivered or cannot be seen with the litter and bitch in a family home.

Dogs are NOT a takeaway or a fridge freezer, they are, as the famous tag-line says, for life!

Would You Be Able To Recognise Puppy Farms 2.0