This week there has been the most amazing video on social media showing a family cat defending her little boy from a vicious dog attack.  In the unlikely event you haven’t seen it, here it is;

Apparently the dog was euthanased, I decision which I agree with.  He displayed significant stalking behaviour towards the child and bit him very badly.  Although he could be contained or chained up, this is not a guarantee he will be left out of control again and could such confinement could potentially make him more dangerous.

In my career I have euthanased dogs for aggression and I have hated doing it each and every time.  I have also made huge efforts to re-home animals presented for aggressive tendencies, when I have felt it appropriate.   Almost without fail they have all been badly let down at some point by their breeders, owners or the home environment. You can usually pick out similar threads in the stories featured in the press; large breed, powerful dogs never taken out on walks; young men owning ‘status’ animals trained to have fighting tendencies or small breeds dogs with high prey chasing instincts left with small babies.

My cases included a young Border Collie who was growling at the children in the family; of which there were four and who often sat with it on the sofa or in it’s bed.  Clearly this was a busy family household, so busy he was only taken for a 10 minute walk every day.  His owners had no comprehension of how inappropriate for their lifestyle he was and how frustrated and bored it was making him.  Luckily we found a rescue capable of taking him on and his life was saved.

Not so lucky was the food aggressive Labrador.  He bit his owners on several occasions and despite having professional behavioural help, they eventually decided to let him go.  It transpired he was bred on a puppy farm and had had no early socialising before he was dumped from the back of a van into their home at two months old.  This left him completely unable to cope with life in the real world and he deteriorated to the point he was dangerous. 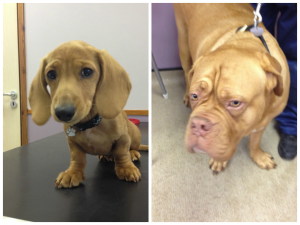 A recent survey showed that the dog breed most likely to cause bite injuries was actually the tiny Daschund, not the bull breeds (like this Douge de Bordeaux) that people often think.

Whenever it is reported a ‘dangerous’ dog has been euthanased, there are howls of protest from people condemning the decision and believing they should have been saved.  Hwever,  once a dog has learned to bite, it can be very difficult to train them out of it and often the biting incident is a symptom of much deeper issues.

There are certainly many well-meaning animal lovers who volunteer to take on these animals but they are rarely properly equipped to deal with them and how can anyone be sure they won’t fall through the cracks again? These dogs need highly specialised, intensive rehabilitation from properly trained behaviourists and there is simply not enough funds and expertise in the rescue system for them all.  They also tend to require knowledgeable and committed homes afterwards to ensure they don’t relapse and again these are in short supply.

The sad, stark fact is there are hundreds of lovely, friendly, well adjusted dogs desperate for homes in rescue kennels all over the country and these should be our priority.

The biggest killer of young dogs is euthanasia for behavioural problems, so clearly this is a massive issue that goes far beyond the headlines.

What can we in the dog-owning and loving community to try to stop bites from happening and save lives?

Educating dogs to be happy and confident in the human world starts right from the moment they are born.  Puppies who have missed out on early socialisation with humans and other dogs are far more likely to be problematic in later life.  A big part of this involves stopping the puppy farms, a battle which is well underway, but privately bred litters kept in sheds or outhouses rather than the home are also at risk.  This training needs to continue when they go to their new homes and throughout their lives.

We must try to ensure people pick a breed of dog wisely and keep them in appropriate environments.  It is also important to educate owners, especially children, on how to behave around dogs and how to read their social signals.  The wonderful Blue Dog Project does exactly this and should be required reading for all doggy families.

There are very, very few dogs genuinely born ‘bad’.  Most who turn into ‘dangerous’ animals are made that way by their breeding, early socialising, training and how they are kept.  Essentially it is we humans who are at fault but it is the dogs who pay the price.  I can remember every one of the animals I have had to put to sleep for behavioural problems and it breaks my heart.  However, the challenges of rehabilitating them are massive and life long.

I would never forgive myself if an animal I ‘saved’ went on to seriously hurt, or kill, a person and this is why I, regrettably, believe that euthanasia is often the best choice in these cases.

Preventing dog bites is, and will be, a hard battle but one which will be worth it to save lives; canine and human.