Vets Are Expensive. Aren’t They?

Well, we are certainly not cheap but then, no medical care is.

Perhaps it is better to ask ‘Are vets value for money?’ and here I can answer with a very definite YES!

However, I’m one of them aren’t I? One of those money-grabbing, over-charging, so-called animal lovers who get pound signs in their eyes every time they see an owner with their beloved pet. So, of course I’m going to say that. 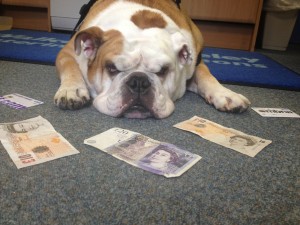 Just in it for the money, aren’t we?!

Let’s compare veterinary costs to those in the private medical sector. I think it is a fairer comparison than to the NHS, where the costs are less easily estimated, and the service vets provide (quick appointments, immediate blood test results, surgery within days) is more comparable to the private medicine.

Often quoted is the comparison between a bitch spay and a human hysterectomy. In the UK the price for an average sized dog is probably around £150, the average cost for private surgery in a woman is £6500. However, most  veterinary clinics keep the costs of neutering as low as possible. So lets consider a laparscopic bitch spay at a referral practice in the UK, were the vet will be a specialised and highly qualified surgeon and the technique is similar to humans.  At one of the UK and Europe’s leading veterinary hospitals the cost is around £500. More than a ‘standard’ spay but still clearly vastly cheaper than the human operation.

However, operations on people are carried out by highly qualified surgical specialists, with probably a dedicated anaesthetist and at least a couple of surgical nurses on-hand, not to mention the fully staffed ward for the aftercare. Obviously the costs will be higher  when we compare them to standard small animal veterinary practice, where you are likely to have a general practitioner vet and one, maybe two, veterinary nurses assisting.  (All doing, I should add, a fabulous job.)

Take cruciate surgery. This is a commonly performed procedure in both humans and dogs. The cruciate ligament is in the knee and when it is damaged, often from falling badly when exercising, (remember Michael Owen doing his at the World Cup?) it usually needs an operation to repair it.  This surgery can performed in first opinion vet clinics where is cost will probably be around £1000 or even less (bargain!).  However, for larger dogs or more complicated injury it is often done at veterinary referral centres, by a diploma holding surgeon and a fully equipped theatre team, where the standards are comparable to the human sector. They will charge you around £4000, including advanced imaging and aftercare. The average cost for a human cruciate ligament repair in the UK is £6000 but this doesn’t always include the scans or post-operative care.

So, it’s still not looking too bad for the vets, hey?

What about the more ‘day-to-day’ costs for pet owners?  Not the fancy-smancy surgery that only a small number of animals need but the more common problems that just require a consultation, some meds and a bill of around £50?

Consultation charges for vets vary around the UK but for a 10-15 minute consultation you can expect to pay around £25-30 and less for follow-up visits. For a private GP appointment with BUPA it will cost £70 for just 15 minutes of the doctor’s time.

Honestly, I think it’s looking rather good for vets at this point. Who, I should point out, train for the same length of time as Doctors at university, learn about multiple species rather than one and are paid very significantly less.

‘Ah ha!’ Our detractors will cry. ‘You always say that but you must be creaming it in. £30 for a 10 minute consult, means at least £240 per hour, plus all the medications with a massive mark-up. I’ve seen the prices at the on-line pharmacies!’

I shall ignore for the moment the fact that not every consult will have a £30 charge (remember it’s less for follow-ups, post-operative checks are usually free and don’t forget vaccines) and the fact that the mythical £240 is very far from being pure profit (staffing costs anyone?!) and just tackle the medications issue. Yes, it is certainly can be much cheaper on-line (isn’t everything?) but the pharmacies have vastly lower costs. Your vets could price match but then they would have to put up other prices to keep their heads above water.

There is a public perception that the price they pay for veterinary care all disappears into the boss’s back pocket but the costs involved with running a practice are massive.  I covered this in my blog ‘Why Your Vet Won’t Give You Credit’ and I’m not going to repeat myself here but suffice to say it is very, very expensive to keep the doors open and given that the average profit levels in veterinary practices in the UK are only 6.4%, it’s fairly clear vets are not the ‘fat cats’ they are often presumed to be.

In addition to the idea that practices are making huge profits there is a common perception that we employees are also earning a fortune. Allow me to take this opportunity to dispel this myth. The average pay for a veterinary surgeon in the UK is just over £30,000 a year. A decent, above average wage but in no way comparable to GPs who are on around £64,000 and often a lot more . Vet Nurses, who are fabulous, caring, wonderful people, fair even less with an average wage of just under £18,000, well below the national average.

So can we please clear up the misconception we do this for the money!

In summary, vets are NOT expensive! We are costly (an important distinction), you will have to pay for our services, you will never walk out from a practice with a bag full of drugs for the same price as a bag full of groceries BUT for the service and care your pets receive from highly qualified, educated and dedicated professionals, we represent incredible value for money!

So next time you are in, before you complain about the bill or make a muttered, off-hand comment about how much we must earn.  Stop, think and just say ‘Thank you’ instead!

If you liked this why don’t you try ‘So You Think You Are A Good Pet Owner?

Tags: how much is a bitch spay, how much to spay my dog, veterinary cost, veterinary treatments, vets, vets expensive

Why Your Vet Won’t Give You Credit

How To Train Your Vets