Home   /   It’s not just shoppers that get stressed in Ikea!

Today I saw a post on Twitter linking to an Ikea advert where they released 100 cats into their store and filmed what happened.  Here is the ‘Making of’ video and here is the advert itself.  Turns out they actually filmed this in 2010, so I’m not sure why it is making a resurgence now.  However, it didn’t seem to make much of a splash at the time and I am not surprised, it is a TERRIBLE idea and I bet once they realised what they had done, Ikea kept it quiet.

Cats are territorial and not particularly sociable under the best of circumstances.  Chucking 100 (yes, really ONE HUNDRED cats!) into an Ikea store, even given how large they are was only ever going to end in stressed out animals, blood shed (from cats and/or handlers and film crew) and plenty of ruined soft furnishings.

The ‘making of’ film shows quite clearly how unhappy the cats were.  In a way I’m surprised the editing showed quite as much stressed behaviour but I think that is down to a combination of the ignorance of the film makers and I suspect their footage showed little else.  The cat’s are seen hissing and lashing out at each other (cats will naturally avoid conflict as much as possible, so this sort of out-and-out aggression is a symptom of the levels of anxiety they suffered), escaping into the rafters (cat’s feel more secure the higher up they are) and behind the displays and generally appearing very tense.  The fact that in the whole of the advert there is maybe one shot of a cat looking even marginally relaxed speaks volumes. 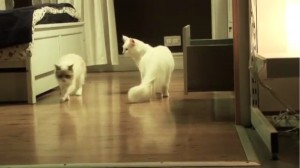 These cats might look happy but on closer inspection you can see both are tense, the one on the left is actively avoiding the other and the upright stance and direct gaze of the cat on the right is quite aggressive.

What this advert really highlights is how little the majority of ordinary people (and even those who know cats well) misunderstand them.  Cats are not little dogs.  They do not enjoy being in new environments or situations and they will rarely socialise with other, unknown to them, cats.  Cats do not need ‘friends’ to make them happy and being chucked into a strange place with 99 other felines, would be pretty much their worst nightmare.  Think ‘Hunger Games’ for cats and you have the right idea.

Perhaps the best use of these videos is as a masterclass on how not to treat your cats and some of their behaviours when they are stressed.  Even in their normal lives a significant number of cats are suffering from chronic stress from being forced to share their homes or gardens with others of their kind. The problem is that it is difficult for a ordinary pet owner to pick up on these signs as cats internalise their issues and prefer to hide away rather than face their problems. Generally people only seek help from vets when the stress finally manifests in physical symptoms like over-grooming or urine marking in the home.

I presume Ikea learned their lesson and quietly swept this episode under the carpet. Talking of sweeping, the people I feel most sorry for are the clean-up crew. Getting the store back to normal after 100 nervous felines (including a couple of entire toms the bonkers breeders brought with them) had spent the night in it must have been a massive and very unpleasant task indeed!