There are four occasions when I see entire male cats in my practice;

When they are 6 months old (or less) to be castrated. (V good)

When they have been fighting and have pus ridden infected wounds. (Bad)

When they have been run over by cars because of their wandering and have broken bones. (V bad)

When they are dead.

Usually because the car didn’t just break them, it killed them, or their owners don’t have the funds to pay for mending them, or their injuries are too great to fix or they have picked up a deadly infection. (VV bad)

And the mind-numbingly frustrating about this is that more or less all of these problems wouldn’t happen if they had just been castrated in the first place. 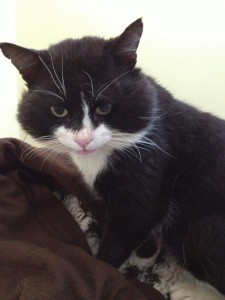 This is an entire male brought into our clinic. Stray, not chipped and he had nasty abscess. Maybe he did have a home, who knows? We neutered him & found him one that could look after him properly.

It’s not difficult, just give your vets a ring, stick your cat in a box and drop it off at the surgery.  The operation is quick, simple, safe and cheap.

Most practices will charge around £50, which is a bargain when you consider the surgical skill involved and the potential costs of fixing the problems above.

If you cannot afford this, that is still no excuse.

The Cats Protection, RSPCA, PDSA, Blue Cross and pretty much any local cat charity, will be able to provide you with subsidised or even completely free neutering.

If you simply cannot be bothered, then you shouldn’t have a cat at all.  Harsh but true.

And don’t talk to me about it not being ‘natural’ or you cat ‘needing’ his balls.  Really?  I mean, really?!

What do you think he would prefer, a life of sleeping and eating in lazy luxury or being driven mad by hormones making him wander, fight, mate and, probably, die early. 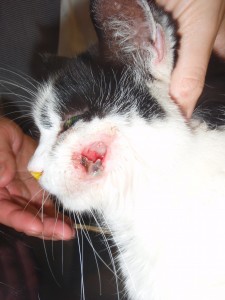 Would you chose this for your cat? No? Then get him castrated!

If I haven’t managed to persuade you by now, consider this; A neutered male could potentially live ten YEARS longer than an entire one!

Truly, there is no excuse.

I am sick of fixing them up because you didn’t.