About a year ago I was doing an evening surgery and two of my consults were puppy check-ups, something I always enjoy!  At first it seemed that the pups were pretty similar; both were small and fluffy, both had a loving new family who had thought carefully about getting a dog and both were in reasonable health.

However, they were different, and in a way that would impact on them for the rest of their lives.

Olly was a Miniature Schnauzer ! His owners had had found out about the litter online and travelled a couple of hours to collect him from a Kennel Club registered breeder.  Olly was tiny and weighed about as much as the huge file of paperwork he had come with!  In his pack was his Pedigree Certificate, his extensive family tree and information on everything from his worming history and diet to advice on training and socialisation. He was also already microchipped.  His proud new family told me in a conspiratorial fashion about his breeder who had insisted they visit a couple of times to ensure they were ‘suitable’ for her puppies and was quite clearly (in a good way!) obsessed with her dogs. 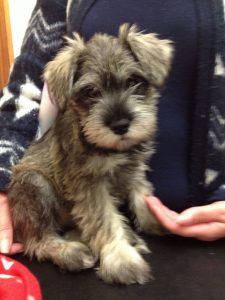 Fred’s appointment was next.  He too was adorable; an apricot Cockerpoo but he had only one scrap of paper to his name; a receipt indicating he had cost his new family £800.

Fred’s owners had thought carefully too about that kind of dog they wanted and chosen a miniature Cockerpoo because of their easy going nature and lack of shedding.  They had also researched online but had found Fred very easily on a well-known selling site, in a home local to them.  They hadn’t seen his mother (the seller said she was out on a walk when they called) and were delighted when, having fallen in love with him as soon as they saw him, they were able to pay (cash only!) and take him home there and then. 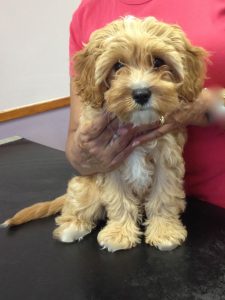 On the surface, both these pups appeared well, neither had any obvious health problems, both were happy and curious.  Fred had fleas and was a bit thin but that’s not too unusual and both were easily sorted out.

I gave them their vaccinations, chatted about feeding, socialising and parasite control (although Olly’s parents were already pretty clued up!) and booked them in for their second jab in four weeks time.

Over the next few months we saw both regularly, my clinic offers free monthly check-ups for puppies, Olly attended these and quickly became a favourite with the nurses.

Fred we saw as well, both for routine check-ups but also for little niggles.  He clearly had a very sensitive tummy and had several bouts of diarrhoea.  We eventually diagnosed an unusual parasitic infection which took a while to clear.

He also turned out to be quite a nervous chap, not aggressive and good with people he knew but he lacked confidence in new situations and wasn’t good at all with other dogs.  We always knew when he had arrived in the waiting room because he yipped his little head off and he was very clingy to his owners, constantly needing to be held or jumping up for attention.

This behaviour wasn’t a massive problem to his owners and they loved him so much they forgave him but it did mean he wasn’t the easiest of dogs.  I guess because they had never had a dog before they didn’t realise life could have been a bit more straightforward.

I suppose you have already worked out whats going on here.

Olly was a well bred puppy; properly raised in a family environment with his mother and the litter.  His breeder cared about him and his health and made sure we went to a family who would do the same.

Who knows were poor Fred came from.  It is highly unlikely that the place his family bought him from was were he was bred.  He is a puppy farm dog; probably born in a dark and dirty shed, maybe in the UK but equally likely somewhere in deepest, darkest Europe.  Given how little he was when he saw me, he must have been taken from his mother far too early (there was no way she was ‘on a walk’ like the seller said)

His owners in some way were lucky; he didn’t have any huge health issues or congenital problems, he didn’t get really sick with Parvo virus just after they had fallen in love with him and he didn’t have Rabies, a very real risk with puppies being brought in from Europe without the proper checks.

However, because of his early experiences; his poor diet, his worm and flea infestations, his total lack of socialising, he will never be quite ‘right’.  Not bad enough, hopefully, for his family to give up on him and pass him off to a rescue kennels (although this happens a LOT), but enough to never be the well-balanced, easy, happy family dog they hoped for.

This is a real story and a scenario that is happening all over the country.  These puppy farm puppies are everywhere, the RSPCA estimate that 400,000 are bred every year.  You might not pick them out immediately but watch carefully and you can spot them.  They are the ones which are behaviourally a little ‘odd’, not great with other dogs, maybe difficult to train.  They end up in rescue because their owners aren’t quite experienced enough to cope with them, or worse, a euthanised because of their behavioural and health issues.

So, if you want a puppy, be like Olly’s owners, not Fred’s.

It is more than just research on the breed, it is finding a reputable breeder, ALWAYS seeing the bitch and ALWAYS visiting the litter at least twice before you take your new family member home!

Join my campaign on Twitter and FaceBook to spread the word – if you want to buy a puppy, you should always See Them Suckling!!

It’s not the breed – it’s where they’re bred!