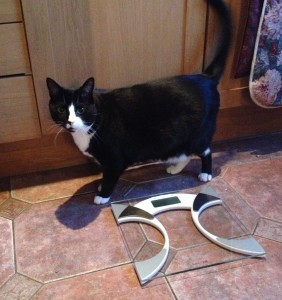 However, I am not too dishearted as it is very common for pets to be slow to start losing weight on new diets. When we go on slim downs, the first few weeks are often when we have our biggest drops but in my experience in our pets, it can seem to take a while to get the ball rolling. The most important thing is not to give up!

I will continue as we are; with measured daily amounts of food, the puzzle feeder and no treats at all and let you know how we get on next week!

In the meantime, here are some interesting facts about exactly how many calories we can be adding to our pet’s diets by giving them even tiny treats of human food;

Using this on-line guide, I have calculated that Fatty only needs 230 calories a day in order to lose weight. Which really shows how even teeny little treats can make a huge difference!

Fatty goes on a diet!